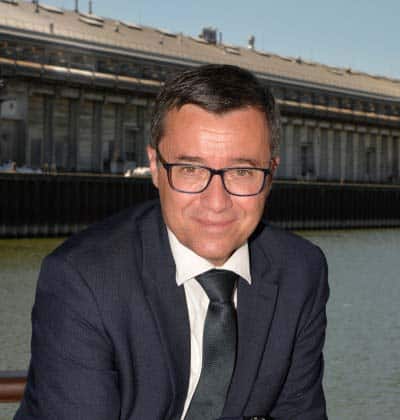 Engineer General of Bridges, Waters and Forests, Stéphane Raison is CEO and Chairman of the management board HAROPA PORT and Vice-Chairman of the Union des ports de France (UPF).

After holding various operational positions in the service of local authorities and then in the field of sustainable development, Stéphane Raison began his maritime career in the Ministry of Transport as chief of the Maritime and Risks Department in Les Sables d'Olonne (Vendée).

In 2009, he joined the port of Dunkerque as Director of Development and Environment and then as Deputy to the CEO. In particular, he piloted the LNG terminal installation project.

From 2012 to 2014, he was CEO of the port of Reunion and led its reform; he developed France's container hub project in the Indian Ocean. In 2014, he returned to the port of Dunkerque as Chairman of the management board.

In November 2020, he was charged by the Prime Minister to finalize the merger of the ports of Le Havre, Rouen and Paris into a single establishment, HAROPA PORT. This project, considered to be the most important in the maritime and port sector in France and Europe, was finalized on 1 June 2021, the date on which Stéphane Raison was appointed CEO and Chairman of the management board HAROPA PORT.