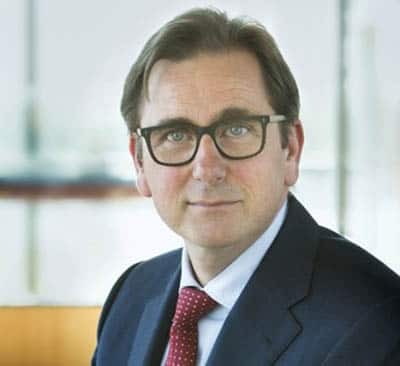 Robert de Bruin started his professional career in 1988 as an information officer at the Ministry of Foreign Affairs in The Hague. After having worked for two years as a junior teacher at Radboud University and 14 years at the Chamber of Commerce in various positions, he started in 2006 as Project Development Manager at Eiffel in Arnhem.

In 2007 Robert made the switch to Van Oord. He started in the Business Development department of Van Oord Netherlands. From 2011 he was Staff manager of Communication and Markets at the head office in Rotterdam. In 2018, he was appointed as Director of Markets and Communication, whereby he joined the Management Committee of Van Oord NV.

On 1 June 2021, he started as Director of Corporate Affairs. In this new role, he works closely with the Executive Committee, Business Units, and staff departments on the themes of public affairs, government relations, sustainability, and ESG-topics (environment, social, governance).

In addition to his work at Van Oord, he joined the Supervisory Board of the Partnership Foundation in 2017. The Partnership Foundation supports the Rainbow Home program to improve the living conditions and future prospects of street girls in India. Since 2018 he is a member of the King Willem I Circle. During his spare time Robert plays the trumpet in various ensembles.