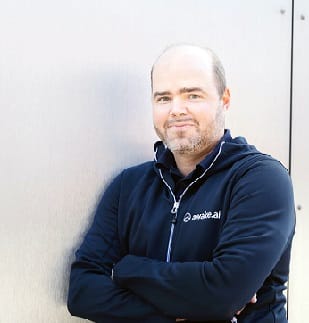 Mr. Karno Tenovuo has been in the marine business since 2004 and launched several groundbreaking solutions to the market. Now he is the CEO Awake.AI. He received his M.Sc. (Tech) from Helsinki University of Technology and his M. Sc. (Econ) from Turku University. First seven years of his career he worked at the Finnish shipyards leading R&D and business development. Then he started his own company and Rolls-Royce became one of his customers and was soon offered a global role heading business development & strategy based in Norway. Two weeks after starting in that role, Karno started the research on future ship operations and then grew that into Ship Intelligence business where was the SVP and P&L owner. Some highlights include project with Maersk & Svitzer that demonstrated the world’s first remotely controlled commercial vessel, Stena and MOL cooperation around intelligent awareness system, Safer Vessel with Autonomous Navigation (SVAN) project with Finnferries that was the first autonomous commercial ship demonstration in the world. Then he realized that autonomous ships cannot interact with the rest of the logistic chain unless the needed digital handshakes are being developed and linked to an open platform. And so, Awake.AI was born.

Mr. Tenovuo is also the chairman of the Board at DIMECC. DIMECC stands for Digital, Internet, Materials & Engineering Co-Creation. It is breakthrough-oriented co-creation ecosystem that digitalizes your business and speeds up time to market. DIMECC network consists of 2.000+ R&D&I professionals, 400+ organizations, 69 shareholders and 10+ co-creation facilitators.