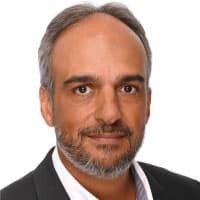 José Firmo took over as Porto do Açu Operações’ CEO in November 2019. With more than 30 years of experience in the O&G services area, Firmo has built a solid international career having worked in several companies of the sector. Previously, he was president of Seadrill Brazil and later Senior Vice President for Western Hemisphere at Seadrill in Houston. He also dedicated 22 years for Schlumberger as Managing Director of the company's operations in Brazil and as VP for Latin America. He also developed relevant institutional roles as CEO of the Brazilian Association of Oil Service Companies (ABESPETRO) and President of the Brazilian Petroleum, Gás and Biofuel Institute (IBP), a position he held until October 2019.