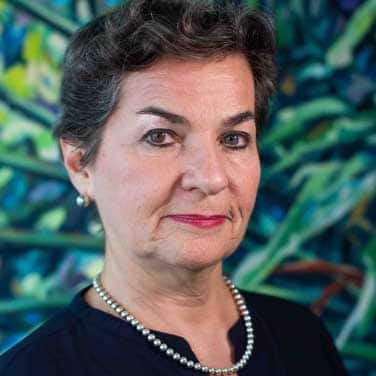 Christiana Figueres is a Costa Rican citizen and was the Executive Secretary of the United Nations Framework Convention on Climate Change 2010 - 2016.

During her tenure, Ms. Figueres brought together national and sub-national governments, corporations and activists, women’s groups, scientists and spiritual communities, financial institutions, and NGOs to jointly deliver the historic 2015 Paris Agreement on Climate Change. For this achievement, Ms. Figueres has been credited with forging a new brand of collaborative diplomacy, for which she has received multiple awards.

She is the co-author of The Future We Choose (Penguin Random House 2019) and co-host of the podcast Outrage and Optimism. She sits on the Board of ACCIONA and Impossible Foods.

She is a graduate of Swarthmore College and the London School of Economics and has been awarded multiple honorary doctorate degrees from academic institutions such as Yale, University of Massachusetts, Georgetown and the University of Edinburgh.