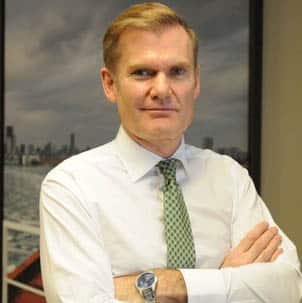 Board Member / President and CEO

Mr. Burrows has been President and CEO of the Chamber of Marine Commerce since December 2016.

Mr. Burrows draws on strong advocacy skills and over 35 years of experience in the transportation and industrial sectors, having held progressively senior positions at Canadian

Pacific in Canada and Europe, the Railway Association of Canada in Ottawa, and TACTIXGovernment Relations and Public Affairs - where he led their ‘Transportation, Infrastructure

Mr. Burrows has attained a distinguished list of achievements for the organizations he has represented, including commercial client account expansion, asset acquisitions, regulatory

In the past, he has been a board director of the Transportation Association of Canada, theGreater Vancouver Gateway Council, the Canadian Society of Association Executives (OG)

and member of the Canadian Chamber of Commerce's Transportation and International Affairs committees and the National Roundtable on the Environment and Economy’s Advisory Committee. He was co-founder of the Ottawa “Learning Lunches” series for association senior executive development.

Mr. Burrows is active in his community and currently serves on the board of The Vimy Foundation. In 2012, Mr. Burrows was awarded the Queen’s Diamond Jubilee Medal for his

work to raise awareness of the national importance of Canada’s victory at Vimy Ridge during the First World War.

A graduate of Upper Canada College and Queen's University with a business degree, he is

also a credited member of the Institute of Logistics and Transport.

He is married to Maria Amalia of the Dominican Republic and has four children.