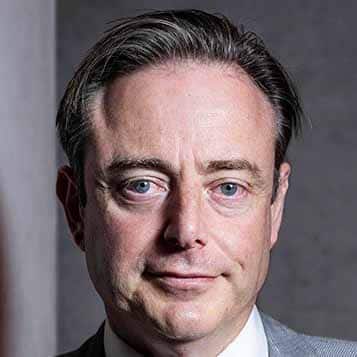 Bart De Wever is the national chairman of the N-VA (New Flemish Alliance) since 2004, the largest party in the country for over a decade and a senior figure in national politics.

Bart studied history at the Universities of Antwerp (UA) and Leuven (KUL). As an assistant at the KULeuven he published several academic contributions. He also wrote columns for various newspapers. These columns and essays were compiled in the books “Het Kostbare Weefsel. Five years of social criticism” and “Werkbare Waarden”. “Vrijheid en Oprechtheid,” he co-wrote with British psychiatrist Theodore Dalrymple.

Bart De Wever interrupted his academic career to devote himself full-time to politics. In 1996 he became a district councilor for the VU (Volksunie party) in Berchem. After the implosion of the VU party, he was one of the founders of the N-VA.

Since 2004, Bart is or has been a member of the Flemish Parliament, the Federal Parliament and the Senate.

Since 1 January 2013, Bart is the mayor of Antwerp, which he describes as “the best job in the world”.